“Keep the Country Country” — from Kahaluu to Haleiwa — is an integral part of needed diversity and versatility for a thriving and sustainable Oahu. This cause has never sounded so pragmatic and urgent for this iconic region as the first shoe of gentrification drops in Kahuku. It’s not about the past; it’s about the future.”

Simplicio  and Lenora Caban will soon be evicted from their home in the background.
The other families include:
Tejada
Salanoa
Fernandez
Caulford
Lagua
Angel Adversalo is in his 90s. 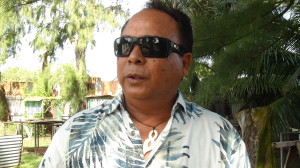 Maghanoy was evicted during Thanksgiving of 2013.  Maghanoy claims that his personal possessions – guitars, deceased wife’s pearl jewelry, tools, and hidden cash were stolen during the eviction. He was on the mainland visiting his daughter during the eviction.
The Eugenio home may have been razed but the controversies continue.