This is a photo circulating in facebook. It explains the situation clearly.  Many Hawaii residents are perturbed that Senate Bill 3122 will allow the Office of Hawaiian Affairs (OHA), a state agency to develop residential high-rises within Kaka’ako Makai (ocean-side) – Honolulu’s last remaining public shoreline area, where residential development is now prohibited by law. 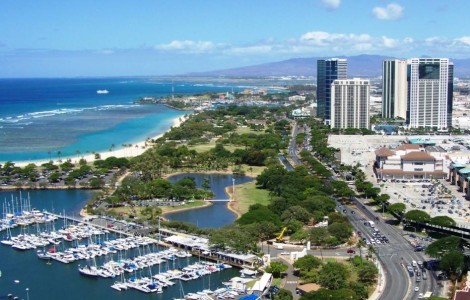 “SB 3122 SD2 seeks to exempt OHA, now owner of several Kakaako Makai parcels, from the 2006 law which prohibited residential development of land makai of Ala Moana Boulevard between Honolulu Harbor and Kewalo Basin.Residential development in Kakaako Makai was banned by the legislature after massive citizen protests against an A&B proposal to construct several 200-foot condo towers there.
HCDA law §206E-31.5…prohibits the authority from: (2) Approving any plan or proposal for any residential development in that portion of the Kakaako community development district makai of Ala Moana Boulevard and between Kewalo Basin and the foreign trade zone.
From 2006 to 2010, in a planning process called by HCDA, people came together to guide the development of the Kakaako Waterfront for the benefit of not only the Kakaako community but for all the people of Hawaii. (4/6/11 staff report)
The result was a conceptual master plan for Kakaako Makai with 9 components, including park expansion/enhancement and waterfront access via parking and traffic circulation measures

Now, SB 3122 SD2 proposes to undo the prohibition of residential development in Kakaako Makai. This must not be allowed because

Kakaako Waterfront Park is one of the last strips of open space and parkland with public access to the shoreline along the urban Honolulu coastline.

With 30 new high-rise towers proposed for Kakaako Mauka and a projected population of 30,000+, there will be a need for this open park space

OHA knew of the residential restrictions when they accepted the Kakaako Makai property, but now wants to develop 4 or 5 condo towers.

In 2006 when legislators prohibited residential development in Kakaako Makai, with only 1 lawmaker in each chamber opposing, it was evident that the legislature had spoken. Are legislator’s votes only good for 8 years? “