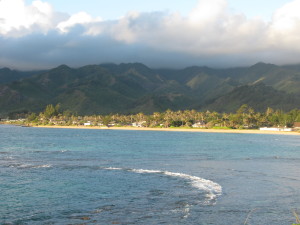 My mother’s maiden voyage to Oahu, Hawaii was a memorable one for us.

Her first knee-jerk observation of Oahu’s majestic Ko’olau mountains were these words in Hokkien, “Why don’t they raze the mountains to build more buildings?”

Keep in mind she had just arrived from Singapore after a thirteen-hour flight. Singapore was a concrete city-state of approximately 2.3 million people then. Most lived in high-rise apartments we call “flats.” Rural areas were systematically paved over for more concrete towns.

However, it didn’t take Mother long to change her mind about turning Oahu into another concrete jungle. She quickly fell in love with Oahu’s surroundings. She decided she really loved Oahu for its beauty, lifestyle, and sense of place — the fresh air, the ocean breeze, the open space, the mountains, the soothing scenery and the friendly people. She’s returned to the islands many times.

Today, Singapore’s population is about 5.3 million, squeezed and squashed onto 274 square miles of land. Indeed, hills have been leveled and new land reclaimed around its harboring shores for more development and more people. Singapore imports 100% of its food. This water-stressed country now depends heavily on expensive desalination plants and water from abroad. Its cash economy means the Everyman has to work for basic survival. The competition is stiff. The cost of living is high.

A Gallup poll reported that Singaporeans are the most unhappy people in the world.

The Singapore Straits Times reported, “Based on a poll of nearly 150,000 people worldwide conducted in 2011 — the same one that branded Singapore as emotionless — Gallup’s reading into the results put Singapore at the top of the list of countries where the fewest adults experienced positive emotions. Singaporeans were apparently less upbeat than the people in places like Iraq, Yemen, Afghanistan and Haiti.”

Why am I talking about Singapore on my very first dialogue with HuffPost Hawaii? Because I see Oahu, Hawaii as “a Singapore-in-embryo.”

Unless those of us who live here and those who live outside of Hawaii come together to define Hawaii’s identity, collectively decide what we want Hawaii to become, and together resolve to protect its unique identity and cultures, Oahu could end up like Singapore in fifty years — a concrete jungle with intense urbanization pressures that produce the most unhappy people in the world.

A wise mentor once counseled, “Be careful which wall we’re leaning our ladders of life on. We could be busy climbing up a ladder — only to find out the views at the top are not what we envisioned.”

I look forward to some friendly “ladder conversations” about Hawaii.