Some landowners of ag-zoned parcels in Oahu received the “ NOTICE TO AFFECTED LANDOWNER IMPORTANT AGRICULTURAL LANDS (IAL) PROJECT” dated December 29, 2016 from the Honolulu City and County’s Department of Planning and Permitting.

That December 29, 2016 letter was probably the first time that many landowners had heard about “IAL”.

Two meetings were made available to the public. One was held in Kapolei and the other was on January 17, 2017 at the Hale‘iwa Elementary School Cafeteria. 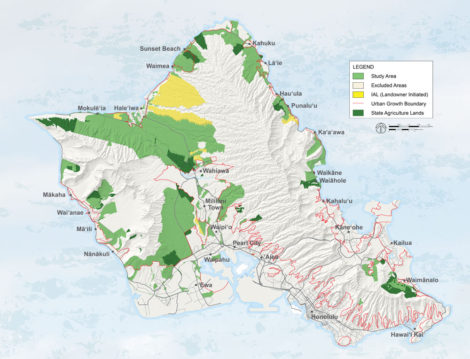 Why is the city doing this IAL Project?

Scott Ezer, the consultant hired by the city and county, framed the impetus for this IAL Project as follows:

“To ensure that the best of Oahu’s high-quality farm land is protected and preserved for long-term agricultural use – great lands, for great Oahu farms. The term “Important Agricultural Lands,” or IAL, is a State land use designation that identifies high-quality farm land to be protected and preserved for long-term agricultural use. In compliance with the State law (Hawai‘i Revised Statutes, Chapter 205), the City and County of Honolulu Department of Planning and Permitting (DPP) is conducting a mapping project to identify lands on O‘ahu that meet the statutory requirements for consideration as IAL. DPP is seeking input from landowners, farming interests and residents about the type of land to include in O‘ahu’s future inventory of agricultural land. The maps produced as a result of this effort will be submitted to the Honolulu City Council for review and adoption by resolution, before being sent to the State Land Use Commission for final approval. “

If the intent was to “promote agriculture and the conservation of productive agricultural lands in the State”, why exclude the 1,555 acres of fertile Aloun Farms (Ho’opili) which contributed 30% of greens to Oahu and has 4 –season plantings. 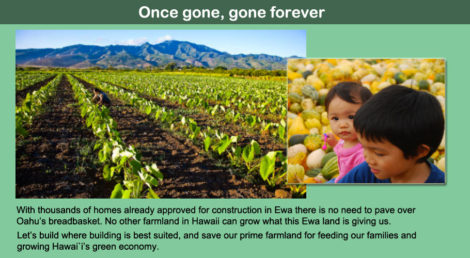 If its intention was to allow tax credit and incentives, why not offer to ALL farmers?

Does IAL appear to favor the large landowners?

What happens to the 50% of the large landowners’ agricultural lands that CANNOT be designated as IAL?

What happens to all the other agricultural lands that are NOT designated as IAL?

Why were some landowners not initiated by DPP while others were?

There are contradictory premises in this process. The following opens a little window into some background of this IAL Project:

“According to people familiar with the legislation, this limitation was a last-minute addition that undermines the intent of the act and the need to protect contiguous blocks of land. The Hawai`i Chapter of the Sierra Club noted on its website, “The final bill… contained an 11th-hour amendment – inserted at the behest of large landowners – which prohibits the state from designating more than 50 percent of any landowner’s farmland as ‘important’ unless they request it be designated as such. The Sierra Club believes that the final bill falls far short of what was envisioned by the state constitution and will fail to provide adequate protection for Hawai`i’s important farmlands.”

The Land Use Research Foundation (LURF), which often represents the interests of large landowners before the Legislature, did not respond to inquiries about the 50 percent limitation by press time. However, the measure undoubtedly gives LURF’s constituents who want to develop their ag lands more flexibility. For example, in its 2006 annual report, Alexander & Baldwin notes that of its 59,320 acres of agricultural or pasture lands and 29,270 acres of conservation lands 8,700 acres have “urban potential.” Hawaii Environment Report Feb. 2008.

Written comments can be submitted until March 31, 2017 to:

Tune in to Country Talk Story – Olelo Channel 54 Sundays 4:00 pm during February to listen to the January 17, 2017 IAL meeting.

Choon James can be reached at 808 293 9111 or ChoonJamesHawaii@gmail.com. www. CountryTalkStory.com