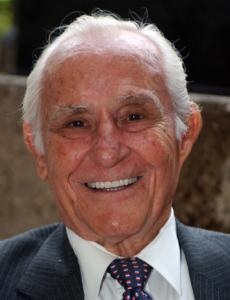 Mayor Frank Fasi established one of the nation’s largest elected neighborhood board systems for Honolulu in the 1970s. Its purpose was to encourage civic participation.

Fasi certainly helped create the ideal environment for a robust and healthy interaction between grassroots constituents and their elected officials:

The Neighborhood Board is full citizen participation in government so that the powers of the City can properly serve and advance the aspirations of its citizens. Through the Neighborhood Board system, every resident has the opportunity to participate in government decision making which affects his or her community. The system applies the concept of participatory democracy, involving communities in the decisions affecting them. It establishes an island wide network of elected neighborhood boards as communication channels, expanding and facilitating opportunities for community and government interaction.

In 1984, Oahu’s voters approved a City Charter a City Charter amendment expanding the role of the neighborhood boards to include all levels of government. Every resident has the opportunity to participate in government decision making which affects his or her community. You can play a significant part in making government more responsive to community needs. The decision is up to you.

Because I live in the Ko’olauloa area, I’ll conveniently focus on the  Ko’olauloa  Neighborhood Board #28. 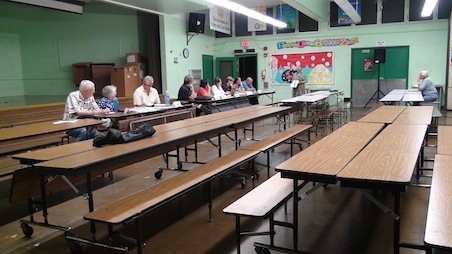 Board meeting at Hauula Elementary School – May 8, 2014

The members of the Koolauloa Board #28 was voted into office with a overall vote of 8.61% in the last election. This lack of participation is unequivocally an issue that needs discussion.

The most recent Ko’olauloa Neighborhood Board meeting was sparsely attended. 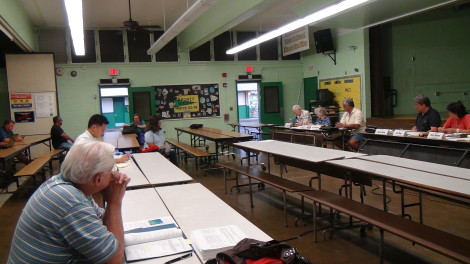 Perhaps, it was the May 8, 2014 agenda content that did not garner much attention:

A. Board Action: Member Hans Ta’ala’s Three (3) Absences for the Year

The  above Laie board member had missed three meetings during the year and his absence that night was an additional absence.  Laie representatives Kela Miller and Gaylene Nikora Lolofie defended Ta’ala with the premise that Ta’ala was not present to explain the reasons for his absences and to allow Ta’ala the opportunity to explain at the following meeting before any action is taken.

The Bus Stop Volunteer Program had a bureaucrat encouraging constituents to assist in building and bus-stops maintenance for free labor.

Other issues like the controversial Honolulu City Council  Bill 47 that amends the 1999 Ko’olauloa Sustainable Communities Plan to include  the proposed new subdivision ” Enviision Laie” at Gunstock, located at Maleakahana, Kahuku and the expansion of the Turtle Bay Resort certainly garnered attention. 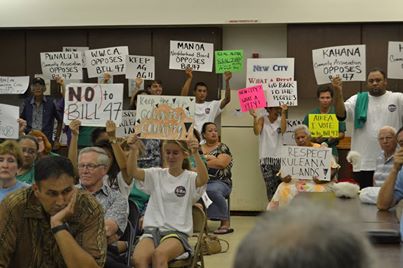 June 8, 2014 may turn up to be a sleeper meeting again. The agenda for new business is as follows:

The Ko’olauloa Neighborhood Board #28 meetings are aired on`Olelo Broadcasting Television –  the 4th Friday at 9:00 p.m. on Channel 49, and on the 2nd and 4th Sunday at 12:00 noon on Channel 54.  Citizens can watch these board meetings any time on http://www.Olelo.org and click “On Demand”.