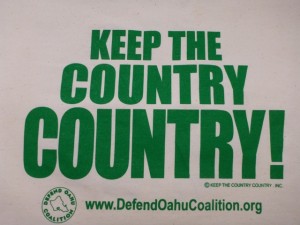 Many islanders are passionate in the cause to “Keep the Country Country” from Kahalu’u to Haleiwa. There are many good reasons to preserve the rural charm and finite  resources — watersheds, agriculture, animal husbandry, open space, view planes, cultural values, and lifestyle  — of this region.

Another good reason to keep the country country is to preserve the economic viability and stability of kama’aina families, many of whom have lived in this region for generations.

However, land investors, through their paid public relations, try to label the “Keep the Country Country” movement as “a vocal minority group of onery ha’oles with nimby problems” or “people who are shutting the gates after themselves”.

But  the general public can now clearly see the negative multiplier impacts of big developers coming to Kahuku:

Today, the Kahuku Plantation Village of about 70 houses is facing turmoil.  http://www.youtube.com/watch?v=yzguOc7tTgQ  Many are facing eviction from homes they’ve stayed in their entire lives. The sweat and equity of inter-generational laborers; along with their heritage and roots are tied to this plantation camp.

The Honolulu City Council, under the leadership of Ernie Martin, has allocated sufficient funds for the city to buy the plantation camp and cooperate with a non-profit group to manage it. But  current Mayor, Kirk Caldwell, refuses to respond to the pleas of the plantation homes residents.

To add to the complications of this intense situation, the attorney for the land owner Continental Pacific, LLC was also the campaign chair for the current Mayor’s “Kirk Caldwell for Mayor” race.

Who will win and who will lose in the high stakes game of profits and survival?

Unfortunately, what is occurring at the  Kahuku Village Plantation residents has happened elsewhere and can be quickly summarized in one word – – “Gentrification“.

In a nutshell, gentrification is the compressed evolution of massive development in communities that produces “winners” and “losers”.

It’s obvious the “losers” are usually the less affluent. Gentrification chases them out of their communities due to the influx of new money and spending power. The less affluent are unable to pay rising rents, property taxes, real estate and the accelerating costs of living.  Local businesses may lose their leases under competition or struggle to pay for newly-built commercial spaces with higher built-in expenses.

Gentrification can alter lifestyle, values, and identity of communities when left unchecked. It inevitably creates disconnect  and conflicts among its residents and communities. In Hawaii, it’s  become a volatile struggle between protecting  values and culture, environment, finite resources, and a chosen island lifestyle.

To prevent urban sprawl and gentrification,  decision makers must adhere to the Oahu General Plan to safe-guard viability and diversity for its residents at large. Keeping the Country Country – from Kahalu’u to Haleiwa  – is an integral part for big picture diversity and versatility of a thriving Oahu.

The plan to protect the charm of old Hawaii, finite resources, food security, watersheds, open space, recreational spaces, view planes, rural lifestyle, and especially the stability of kama’aina residents, must continue to be the basis for thoughtful land-use planning  for Oahu.

“Keep the Country Country” has never sounded so pragmatic and urgent for this iconic region of Oahu.  It’s not about the past; it’s about the future.