5. Does the city need to boost its revenue? If so, how should that be done?

Why do I think of Nobel Prize Economist Milton Friedman who stated that if you put the government in charge of the Sahara Desert, it would run short of sand in five years?

I’ve been participating in the city budget process for ten years. There are misguided fiscal priorities like the $1.2 Million consultant from NY and $20 Million to upgrade the Ala Moana Park that irritates local residents to no end.

There are also systematic failures in the budgeting system that limit the Council’s ability to control budget priorities and spending.

Huge amounts of funds were expended into consultants, planning and design renderings for the Blaisdell Center Master Plan but recently, Mayor Caldwell said he would hold off. So,  are we going to repeat another expensive master plan again down the road?

One of the best lines I heard was Budget Chair Ann Kobayashi telling HART CEO Dan Grabrauskas that she took risks with her own money, not the taxpayers’.

Our residents work very hard for their money. Our job is not to plunder the city treasury but to protect it. 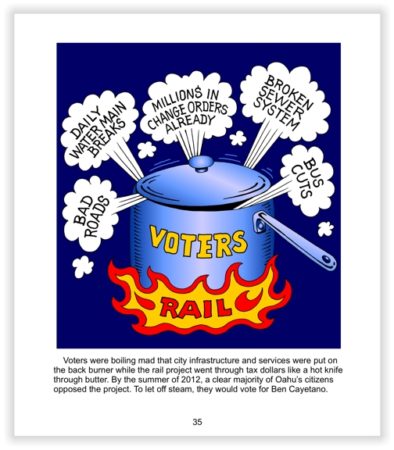 There have been various suggestions ranging from work schedules amongst civil government workers or UH and public/private schools students, bus rapid transit, telecommuting, and so forth.

I am no expert in this area. I could list some of the ideas put forth by others but it does not do the city justice.

What I think would be good is if we offer a substantial cash prize  for a traffic decongestion competition.

NASA does competitions regularly for solutions.

We need to be sure to keep the lobbyists, publicists, marketeers, and the good old boys club at bay.

Allow the independent and fresh minds to have a go at the solutions.

Then, allow the public to review and opine on the ideas put forth and choose the most viable and effective ones that reflect our island values and sense of place.

Our residents have valuable local knowledge and wisdom and can contribute to the solutions. 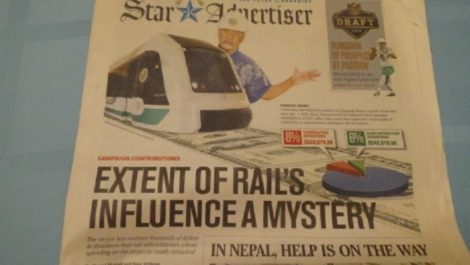 There will always be the poor amongst us in this modern cash economy. There is no one silver bullet to this homeless issue. Some require mental health/ addiction help, but most need rental units. Coordination with state and federal is imperative.

I do not support an island-wide ban.

Since the first sit-lie bill in 2014 for the Waikiki Special District, I’ve consistently testified at Council hearings that ‘sit-lie” bills must be accompanied with options for those affected.  Pushing the homeless around does not solve the problem.

Undoubtedly, we must maintain clean, vibrant and safe public spaces for the public and businesses.

However, burning personal items into ashes is cruel. Confiscating personal papers and medication is inhumane and creates more complications for the down trodden.

Over a million dollars were squandered through court settlements and legal fees because the city violated due process in its sit-lie implementations.

HUD CDBG funds have been diverted from non-profits and homeless shelters for pork and pay-to-play projects. 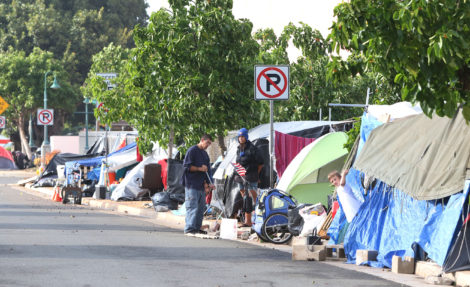 1. How do you think the city should pay for the operation and maintenance of rail once it’s built?

Shouldn’t this O & M costs be addressed at the initial stages?

City then contracted with PB to design the rail route. City then hired InfraConsult LLC to coordinate with PB. (Three PB principals formed InfraConsult prior to the City’s contract).

HART, the semi-autonomous transit authority, was formed with nine appointed directors with no transit background. (Mr. Robert Bunda, fellow candidate, joined the HART Board in 2013.)

The 2012 federal Porter Report stated that Oahu had the ability to pay for its rail project, but must forgo other expenses!

Experts have questioned the ridership estimate of 119,600 trips per day. It’s nearly twice the ridership per kilometer of Miami’s heavy rail – a metropolitan area five times the size of Honolulu.

This ridership estimate is also little higher than Atlanta’s with a population six times the size of Honolulu, according to Erick Guerra, assistant professor of city and regional planning at the University of Pennsylvania.

The Tren Urbano in San Juan, Puerto Rico achieved only 23% of its ridership projection. Rail bonds contributed to its accumulated $74 Billion bankruptcy.

When will the oligarchy stop this fiscal insanity and reassess this runaway project? 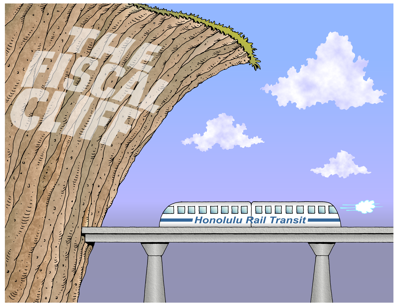 City Council Candidate Robert Bobby Bunda and I are on the opposite ends of many public policies.  Mr. Bobby Bunda was on the PLDC Board and we were challenging him.

The PLDC  – Public Land Development Corporation – was a moment in time when all of the Hawaiian Islands combined to repeal Act 55.  PLDC caused so much anger amongst the residents. The name itself was an oxymoron.  PRIVATE developers should not be given unfettered access and authority to use PUBLIC lands.

People Power from all the islands of Hawaii ganged up and repealed the bad action in 2012.

Choon James is shown here at the State Legislature trying to prove a point – Don’t keep throwing good money into the fiscal black hole. The state Senate Ways and Means Committee narrowly voted to advance the $2.37 billion  bail out for the city’s financially troubled rail project on August 28, 2017. 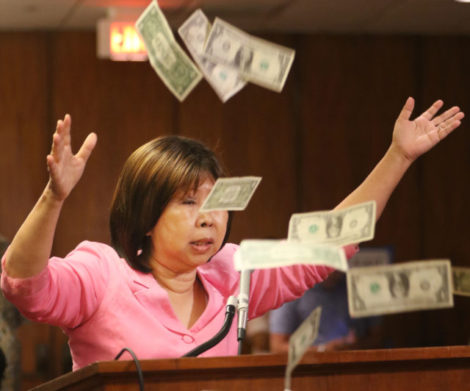